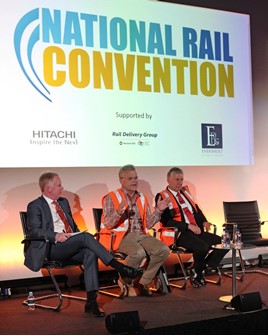 Industry leaders have given their backing to a proposed national advertising campaign on behalf of the entire rail sector, in a bid to tackle its skills shortage.

The suggestion was made by former Liberal Democrat Deputy Leader and audience member Simon Hughes, who called for a more unified sector-wide campaign to build on the individual efforts currently being made by large employers including NR, HS2 Ltd and Transport for London.

Hughes said that bold messaging should be used to boost its impact and increase uptake, such as the ‘Your Country Needs You’ slogan first used during the First World War to raise recruitment for the armed forces.

A similarly hard-hitting and co-ordinated approach by the rail industry was recommended by Hughes as a possible solution to meeting an estimated annual shortfall in the UK of 20,000 engineers and apprentices, which must be addressed in order to fulfil future construction projects such as HS2.

Carne said: “The industry came together for the first time in two decades last year with the Britain Runs on Rails national advertising campaign , to try and promote one image for the industry.

“That’s a foundation stone that we could build on, and I think it’s a really good idea to build on the platform we already have. I’ll take this idea to the RDG and suggest that it is one of the core themes for the Britain Runs on Rail programme.”

Thurston commented: “Between us we’re putting a volume of men and women to work on a scale not seen for several decades.

“The last time a campaign was run with a ‘Britain Needs You’ message, we were at war. We’re not quite on that scale, but nevertheless when you join the dots between what we’re doing and what’s going on elsewhere across the country, the construction and engineering sector should be drawing new talent by making more of a national appeal.”

Brown added: “I think you’re absolutely spot on, and there is always more we can do collectively. The three of us are on stage together today, but probably don’t spend enough time together talking about these things collectively and having this type of dialogue.”