MPs join forces to push for confirmation of HS2 to Leeds 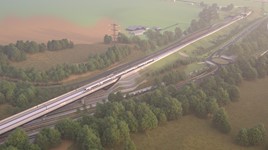 Further delays to HS2 reaching Leeds will cost the region’s economy an estimated £1.7 billion per year, according to a cross-party group of politicians.

MPs and non-affiliated peers from across the Leeds City Region have joined forces and are calling on Government to publicly commit to building HS2 East to Leeds at the same time as HS2 West is built to Manchester.

They say this commitment is needed “at this most critical and fragile time for our economy”. The work is currently planned for 2035-40

In a letter to Secretary of State for Transport Grant Shapps, the group of nine MPs and two Peers, led by Hilary Benn (Labour, Leeds Central), wrote: “We are very concerned that the ‘pause’ to consider the planned delivery of HS2, beyond Birmingham, may result in HS2 East not being given the same prioritisation as HS2 West. This is despite the eastern route being developed into a much more mature state and is now in a good position so that work can progress to the next stage.”

The letter says the arrival of HS2 in Leeds is estimated to generate economic gains of £54bn and that the eastern leg has a Benefit:Cost Ratio of 5.6, compared with 2.6 for the Manchester leg.

It states: “HS2 is the only credible, developed plan to address East Coast Main Line capacity for current and future generations.”