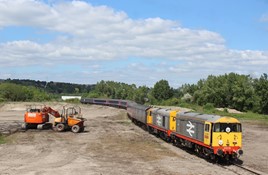 One hundred High Speed Train Mk 3s had either been scrapped or been sent for scrap by May 13, when RAIL 905 went to press.

Continued delays to the ScotRail Inter7City project, combined with the costs involved in modernising the vehicles and the lack of HST-compliant maintenance depots, means there has been no interest in leasing the coaches other than for individual vehicles.

The rolling stock company had begun to dispose of its stock at Ely from April 20, when the first convoy ran to Eastleigh Works.

Eastleigh moves are carried out by GB Railfreight, and those to Newport by Rail Operations Group.