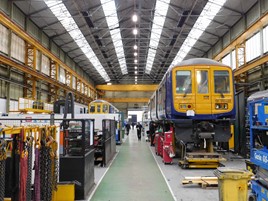 Originally, two ‘769s’ had been ordered for a Thames Gateway-London Liverpool Street service that should have started in May.

Delays to the FLEX project means that will now be later in the year, but this has not stopped ROG investing in more trains. Three paths in each direction per day have been validated by Network Rail for the first route, as has platform occupation time in the terminus.

Subsequent services will be Anglo-Scottish trains, as well as a train to the West Country. Rail Operations (UK) Limited Chief Executive Karl Watts told RAIL that a number of Midlands-based logistic hubs will form the nucleus of the operation, although he was unable to name them due to signing Non-Disclosure Agreements.

He explained: “Just taking the seven customers we’re at an advanced state of discussions with, we’d need 31 Class 769s alone!”

Watts told RAIL: “With a few little modifications to the Class 319 control circuitry, these can be made to work in multiple with a Class 769.

“What we’re considering at the moment is coupling ‘319s’ to ‘769s’ on operations which require eight-car or 12-car capacity. The idea is that all units are powered up under the wires but, when transitioning onto a non-electrified route, the ‘319’ completely powers down and the ‘769s’ then act as a ‘tractor’ unit for the ‘319’.

“These routes are typically lower-speed routes and the ‘769s’ have sufficient ‘grunt’ to haul the dead ‘319’.”

Watts said that ROG had been expecting its first ‘769’ in April. This will now be September, with the second FLEX a month later.