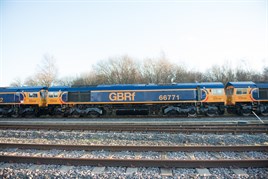 The 21 American-built Class 66s that have now all been delivered to GB Railfreight from Electro-Motive Diesel in Muncie (Indiana) may not be the final examples of the class after all.

GBRf has confirmed that it has seven ‘66’ engines available for new locomotives, although the operator added that no order has yet been placed for further locomotives.

Under the EC Non-Road Mobile Machinery (NRMM) directive, 26 locomotives that do not meet Stage IIIB emissions standards could be placed on the market from a single manufacturer, provided they were delivered into the UK before 2015, when the regulations change. That means that five of the class are still allowed under the rules.