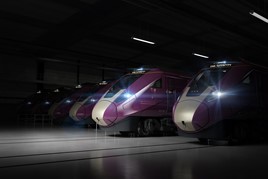 The introduction of 33 bi-mode trains from 2023 will be an enabler for electrification of the Midland Main Line, claims East Midlands Railway Commercial Director Chris Wright.

EMR has 33 five-car Class 810s on order from Hitachi in a £400 million deal funded by Rock Rail East Midlands.

The first train is due to be complete and ready for testing in the summer and they will enter traffic from the first quarter of 2023, replacing the current Class 180 and Class 222 fleets.

The decision to use bi-modes on the MML was made by then-Secretary of State for Transport Chris Grayling in July 2017, when cancelling plans for full electrification from Bedford-Nottingham/Derby and Sheffield. EMR ordered the Hitachi trains in August 2019.

At a virtual press briefing on January 13, Wright said: “There’s a view saying we are rolling out the wrong product. I think this is the right product. I think this helps remove barriers because they will be able to run on diversionary routes that would otherwise not be electrified. They are an enabler for electrification.”