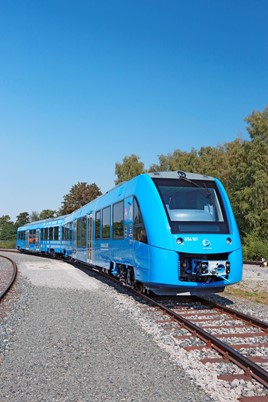 Rail Minister Jo Johnson told the Transport Select Committee on April 30 that a hydrogen train was on trial in the Lake District.

Despite commitments to test such a train in the UK, there is currently no hydrogen-powered train on the national network. Alstom’s iLint trains are being trialled in Germany, where Johnson said he would be visiting soon.

Asked by TSC Chairman Lilian Greenwood where such technologies are being trialled, Johnson said: “There’s a hydrogen trial in the Lakes at the moment.”

Pressed on the purchase of bi-mode trains despite at the same time challenging the railway to eliminate diesel trains by 2040 (RAIL 847), Johnson denied this was inconsistent. He called bi-modes a “bridging technology”, and said the diesel element could be replaced by other sources such as batteries or hydrogen power.

The Minister was being pressed on the Government’s electrification policy, during the TSC’s final hearing into rail infrastructure investment.

Greenwood quoted the National Audit Office (NAO) report into electrification, saying the reason schemes had been cancelled was because the Department for Transport (DfT) had run out of money.

“Wouldn’t it have been better if the Department had been clearer about this from the outset?” she asked.

Johnson responded: “The schemes were cancelled… because since the time they were first announced, new technologies were developed that enabled the bulk of passenger benefits to be realised by other means, principally by bi-mode trains.”

Greenwood said that according to the NAO, bi-mode trains with the required performance did not exist when the Secretary of State for Transport made his decision.

Johnson countered with a claim that the technology was being trialled on the Great Western Main Line, stating: “I don’t think it’s quite fair to say the technology did not exist.”

DfT Director of Rail Network Services Brian Etherington confirmed that trains offering that performance did not exist at the time of the decision, but that “unmuzzled” trains on the Great Western Main Line could run at the required speed. He said suppliers are developing solutions that will be ready in time for future rolling stock on the Midland Main Line.