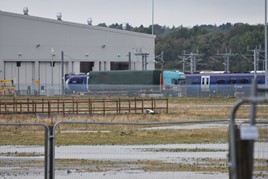 A metro vehicle has been delivered to Hitachi’s Newton Aycliffe facility, as the Japanese manufacturer looks to fill the void between orders at the site.

The company declined to confirm to RAIL any details regarding the vehicle, which arrived by road on October 7.

However, sources have said it is from an order of 12 metro trains destined for Milan’s Azienda Trasporti Milanesi (ATM) system, following a contract for 60 trains signed in 2012. This latest fleet will be used on the Italian city’s Lines 1 and 2.

A Hitachi Italy press release from July 2018 states that the trains would be built in Reggio Calabria and Naples (southern Italy), with deliveries to start in autumn 2019. Both facilities form part of the Hitachi business.

There have been concerns regarding the future of the County Durham facility, with current orders nearing their end and no new deals on the horizon. Currently, a handful of LNER five-car Class 800/2s are left to be delivered, as are the final Class 801/2 Azumas (also for LNER), and one Class 385 (for ScotRail).