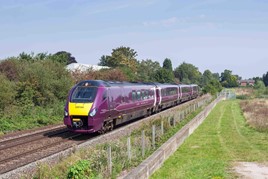 Seventy-three stations on the existing network will benefit from the introduction of HS2, including 54 that have no direct link to the new railway.

Research by Midlands Connect submitted to the Oakervee Review shows that HS2 will create 576,000 extra seats per day, meaning a reduction in overcrowding on the national network – allowing new services to be introduced.

The research also suggests HS2 will free up a further 144 extra freight paths per day, equivalent to 2.5 million more lorries’ worth of cargo on the railway.

“The benefits of HS2 will be felt by millions of people across the UK, including passengers that never set foot on a high-speed train. Regional and local rail services are in desperate need of improvement and it’s time we face facts - without the space and flexibility created by HS2, the transformational change needed is not possible,” said Sir John Peace, Chairman of Midlands Connect and Midlands Engine. “It is the capacity released by the line – not just its speed – that will give the whole network a desperately needed overhaul. We haven’t built a new inter-city railway north of London in a century – piecemeal interventions will do no more than paper over the cracks of an overloaded, tired network. Left unchanged, these deficiencies will stifle growth and prosperity for decades to come.”