Metrolink celebrates 25 years at the top 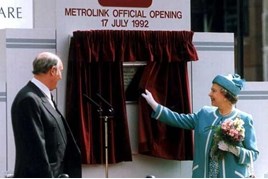 Metrolink is today celebrating its 25th anniversary – having tripled its original size to become the largest tram network in the UK.

Now a sight familiar to millions, Metrolink first opened its doors on 6 April 1992, when passenger services started operating between Bury and Manchester Victoria.

Services to Altrincham followed soon after, before Her Majesty the Queen officially opened the network during a special ceremony in July that year.

Fast-forward 25 years and, following on from the first step of the light rail renaissance, the network has grown beyond all recognition, catering for more than 37 million passenger journeys a year and rising.

Councillor Andrew Fender, Chair of the Transport for Greater Manchester (TfGM) Committee, said: “Having overseen the development of the original plans to reintroduce a tram system to Greater Manchester, I’m immensely proud to see the positive impact it’s made to so many people’s lives.

“It took 10 years to develop the first lines out to Bury and Altrincham, so you could say that today’s birthday is in fact the realisation of 35 years of careful planning and commitment by a great many people.

“Metrolink was developed with the future in mind so it was inevitable that expansion was on the cards. It was absolutely essential that we were able to serve areas where population growth was expected, but to also be flexible enough to adapt to those places where it perhaps wasn’t forecast back in 1982 – like Salford Quays and east Manchester.

“This year has already seen us deliver the Second City Crossing and start work on a new line out to the Trafford Centre and that’s a real testament to the fact that we don’t rest on our laurels. Here’s to another 25 years of growth.”

While Greater Manchester has always enjoyed a rich history where trams are concerned, prior to 1992 one hadn’t operated since 1949 when the last service was decommissioned to be replaced by buses.

The concept of bringing trams back into service was born back in 1982 when a Rail Study Group was created to give the local rail network a secure long-term future by creating a new north/south link across the city centre that was much easier for people to access.

The group consisted of members from Greater Manchester Council, GMPTE and British Rail and it was within this group that plans to create the UK’s first modern street-running light rail system was developed.

Ten years in the making and Metrolink’s opening heralded a new chapter in public transport and set the standard for other tram systems to follow.

Danny Vaughan, TfGM Head of Operations for Metrolink, said: “The Metrolink story is remarkable and I’m proud to now be a part of that story.

“Having delivered a transformational construction programme that’s unparalleled in the light rail industry in terms of the size and scale of growth, it’s fitting that we’re celebrating the 25th anniversary in such a bumper year.

“I’m delighted to be at the helm of a network that is so forward-thinking, but it would be remiss of me to not pay homage to everyone who has helped to craft and shape such an iconic symbol of Greater Manchester over the last 25 years.”

As part of a number of events to mark the silver jubilee year, TfGM is partnering with the Bridgewater Hall – which celebrates a 21st anniversary this year – to create one epic creative music project, which will be launched during a special event at the Bridgewater Hall later today.