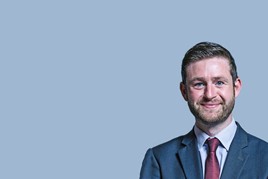 Post-pandemic, the country must build back better than it was before. And rail can help in kickstarting the economy.

That was the message from Shadow Transport Secretary Jim McMahon on February 25. Delivering his Beyond COVID: Labour’s vision for rail speech at the virtual National Rail Recovery Conference, organised by RAIL, McMahon told delegates this meant making sure that investment is really seen through.

“We cannot have announcement after announcement from the Government, and then reannouncements, without seeing the money fall through onto the ground so people can see it and feel it.

“We cannot allow delivers of investment to really feel the brunt of cuts to their own budget in the way we’ve seen with Transport for the North, which has had not just a cut to its core budget, but also a significant cut to its smart ticketing project that would have meant travel was far better across the north of England.”

McMahon also criticised cuts to Network Rail’s spending: “We’re six months on now from Stonehaven, where we’ve seen the human cost of the landslide and the impact of climate change.

“It’s really important that we don’t let the foot off the gas when it comes to investment, to make sure that we protect our key infrastructure, so frankly, it beggars belief that the Government has cut the budget for NR by £1 billion. And we’re very concerned that that cut won’t fall evenly across the whole of the UK.”

McMahon said that Labour wants to make sure that region is not set against region: “Of course, we want to see every region reach its full potential, but we have to reflect that had the north of England received the same investment as London and the South East over the last decade, it would be £66bn better off. £66bn better off on key transport infrastructure, to make sure those economies can thrive, and that people are connected to opportunities where at the moment they feel disconnected.

Transport for West Midlands has launched a discussion paper setting out local challenges and opportunities for the transport system.