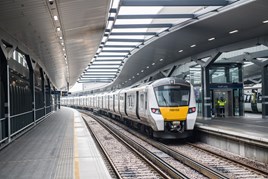 The sheer number of visitors and workers in London is a principal reason for a bigger spend per head on rail in the capital than in the North, or the national average.

Rail Minister Paul Maynard (MP for Blackpool North and Cleveleys) defended the levels of spending in a Commons Written Reply to Mike Hill (Labour, Hartlepool), who had asked about the situation.

Maynard claimed that the Department for Transport focuses on delivering outcomes for transport users, not on how much is spent per head.

He said: “There are various problems with attempting to compare transport spending on a spend per head of regional resident population basis. The calculation for London, for example, doesn’t account for the substantial number of daily commuters and visitors, both domestically and internationally, who will be using and benefiting from the roads and public transport networks but who aren’t London residents.”
Maynard said that two in every three rail journeys start or end in London, and that there are 18 times more passengers arriving in the capital than Manchester, which is the busiest city in the North.

He added: “In particular, as the main international gateway into and out of the country, London will be the location for transport investments which look to serve passengers well beyond the local resident population. The unique scale and urban density of London also means that large-scale public transport networks are particularly important.”

Maynard said that DfT decisions regarding funding allocations are based on “a rigorous and fair appraisal process that ensures spending goes to the projects and programmes where it is most needed and delivers greatest value-for-money for both taxpayers and passengers”.

He then listed projects that are under way, including the withdrawal of Pacers, building HS2 and the Great North Rail Project.