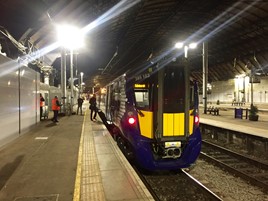 Radford was speaking on board 385103, during the evening test run between Edinburgh Waverley and Glasgow Queen Street.

Approval from the Office of Rail and Road is needed before ScotRail can use the type on the newly electrified route between Scotland’s two major cities. That approval is expected following a test programme that has checked interactions between wheel and rail, pantograph and overhead line equipment (OLE), and the electrical interference the train produces. Radford said that Network Rail had accepted the pantograph/OLE test results the week before.

Meanwhile, on February 6’s test run, Driver Simon Smith from DB easily reached the 50mph speed limits that applies on the steep gradient up Queen Street Tunnel. He said he had to ease back power before reaching the end of the tunnel, to avoid breaking the speed limit.