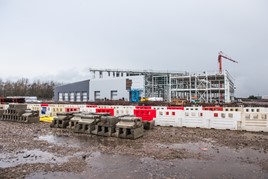 The Spanish manufacturer said it scoured the UK, investigating more than 100 sites, before selecting Celtic Business Park at Llanwern, near Newport.

CAF will be able to build trams, suburban and metro fleets, and inter-city and high-speed trains at the site. The factory will measure 46,000m2, with a floor area of 15,000m2 (the equivalent of two rugby pitches). The internal volume is 167,125m3 (the equivalent of 1,500 double-decker buses).

The factory will create 300 new jobs, according to CAF. The company plans to start recruiting staff in the spring, and offer training and apprenticeships from the autumn. It also plans to support the wider UK rail industry supply chain by developing a ‘cluster’ of local and national companies to supply train parts.

“The factory will have the flexibility to allow us to respond to the exacting demands of both existing and new customers, by providing the most complete offering of any rolling stock provider operating in the UK,” said CAF UK Director Richard Garner.