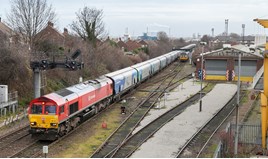 RAIL Freight Group chairman Lord Berkeley has blasted the Office of Rail and Road (ORR), claiming the regulator is trying to manipulate the freight market with its consultation on increasing network access charges for trains carrying biomass fuel.

The ORR launched a consultation last year asking for views on its plans to introduce new charges in order to recover some of the fixed costs of the network (RAIL 842). Biomass, produced from waste wood and other organic materials, is classed as a renewable energy source.

“The ORR is muddling ‘what is the charge which is cost-reflective’ with ‘can the market stand?’. They did it with coal and that was a very big part of the rail freight sector, but biomass is a very small sector and the ORR is trying to influence the mix of energy,” Berkeley exclusively told RAIL. “Why is it interfering in the market? Why it is doing it at all? If biomass is a good thing and it is environmentally friendly and the costs are good, why should the ORR say ‘it’s affordable’ or ‘it isn’t affordable’?”

Lord Berkeley, who has announced his intention to retire from the RFG chair in November, continued: “I think the ORR should keep out of trying to manipulate the market. Whether they will or not we’ll have to see.”

When RAIL asked Joanna Whittington, chief executive officer at the ORR, for an update on the consultation at a conference in London, she refused to comment. However, her private secretary later issued a statement to RAIL saying: “The ORR is in the process of considering the responses and considering the options. Our final proposals will be published in the draft determination which we are expecting to come out in the early summer.”