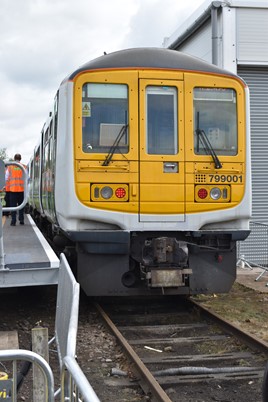 Porterbrook and the University of Birmingham’s Centre for Railway Research and Education (BCRRE) have confirmed that the UK’s first hydrogen train, HydroFLEX, will be tested on the main line railway following a successful proof-of-concept.

The mainline testing of HydroFLEX marks an important step in the development of a zero-carbon emission propulsion system that could help to decarbonise Britain’s railway.  The HydroFLEX pilot involves fitting a hydrogen powerpack to an existing Class 319 electric multiple unit, which would eventually allow it to run on conventional electrified routes as well as independently. This results in a highly flexible train that can operate on different parts of Britain’s rail network

Mary Grant, Porterbrook CEO said: “Sustainability and innovation are integral to what we do here at Porterbrook, and so we are tremendously proud to have played a key role in designing and building the UK’s first hydrogen train. This is a first test but we are excited about being in a position to provide HydroFLEX as a viable offering very soon. Britain’s railway has a key part to play in reducing transport emissions and we are committed to helping our customers play an important role in delivering this.”

Helen Simpson, Porterbrook Head of Innovation and Technical Services, said: “The Porterbrook team are delighted to support the testing of HydroFLEX on mainline railways. We have been very pleased with how the train has performed on the test track and are looking forward to getting it out on the national rail network. Delivering the UK’s first hydrogen train is a huge step for the rail industry and marks a milestone for green transport everywhere. Demonstrating how mainline approvals for hydrogen can be delivered is the next step forward and allows more people to see the benefits of hydrogen.”

Alex Burrows, Director at Birmingham Centre for Railway Research and Education, commented: “This is a great success story for the UK Rail Industry, which shows our capability and commitment to helping the government meet decarbonisation targets. Key to this success is the close partnership between academia and industry which has enabled us to pool the expertise needed to rapidly progress this technology from concept to full-scale working demonstrator.

“This partnership between the University of Birmingham and Porterbrook has been a trailblazer for academia and industry accelerating ideas into practical application on the railway.  We look forward to the next phase of this project which will take this technology onto the UK railway.”

Dr Stuart Hillmansen, Senior Lecturer, Birmingham Centre for Railway Research and Education noted: “Our prototype shows how hydrogen powered technology can be incorporated within existing trains, without needing to modify the drivers’ controls. It’s an exciting advance because it shows how this technology could be adopted into the mainline system to deliver emission-free public transport.”

Birmingham Centre for Railway Research and Education (BCRRE) is gearing up to host a major world conference in three months’ time.