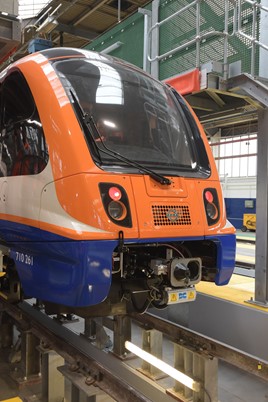 The four-car dual-voltage EMU was then returned to Derby Litchurch Lane, where it was built by Bombardier, the following day.

The trains will be able to carry almost 700 passengers and will feature WiFi and USB charging points.

The EMUs will initially be put into service on the Gospel Oak-Barking route, which has been electrified following a lengthy delay.

The '710s' will replace two-car diesel multiple units, doubling capacity on the route in the process. Testing will start this summer, ahead of the trains entering traffic in the autumn.

Jonathan Fox, TfL’s Director of Rail and Sponsored Services, said: “We are now planning for the first trains to enter passenger service on the Gospel Oak to Barking route by November.”

Will Rogers, Managing Director of Arriva Rail London, added: “The London Overground is vitally important to the thousands of people who use it every day. This is why we are focused on continuously improving the travelling experience for our customers and working environment for our people. Our team has been working hard to prepare for the introduction of these new trains and we are really excited about the benefits they will bring in the long-term.”