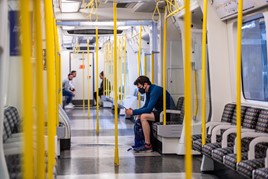 Byford told the RIA annual conference last week that the contract was signed at 2346 on the night before the previous government support ran out.

“It has certainly been the most surreal introduction to any job that I have ever done,” he said. (He only took over the job in early July.)

“My last few weeks have been dominated by a funding deal with Government. We have achieved that for the six months to the end of March. It was gruelling and exhausting. We didn’t expect a blank cheque and there are conditions. I think it is a fair deal.”

The funding arrangement was described by the Government as a “bailout”. Transport for London will receive £1.8 billion, mostly as direct grant. The temporarily increased £15 a day congestion charge will be retained, and City Hall said council tax bills would have to rise next April.

The Underground is running 95% of services, while 85% of the Overground timetable is being maintained. TfL Rail, which operates Elizabeth Line trains, is at 100%, with Docklands Light Railway on 84%. Just before the second lockdown, overall passenger numbers had recovered to 32% of pre-pandemic levels.

Byford said: “We have to get beyond these six-month deals. We have to get TfL onto a stable footing. My pitch is for a five-year deal.”