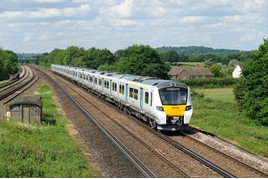 Train operators in London and the South East helped to improve national punctuality in the fourth quarter of 2017-18 (Q4, January-March 2018), according to the latest Office of Rail and Road statistics.

The LSE sector figure for the quarter was 86.9%, a rise of 1.7 percentage points (pp) compared with the corresponding three-month period in the previous year, helping overall punctuality for the quarter to rise by 0.1pp to 87.8% of trains arriving on time on a moving annual average basis.

London and South East operators also improved their figure in terms of Cancellations and Significant Lateness (CaSL), with a drop of 0.5pp to 4.2%, although Regional and Scotland sector recorded a 0.6pp increase to 2.9% and long-distance operators recorded a 1pp rise to 5.8%.

But Greater Anglia recorded its lowest punctuality (87%) since 2004-05, and South Western Railway its lowest since 2003-04, with a Public Performance Measure (PPM) of 81.4% accredited to the impact of severe weather.

In the Regional and Scotland sector, Arriva Trains Wales recorded its worst reliability (a CaSL score of 3.0%) since 2006-07, and Northern its lowest punctuality (88.2%) since 2009-10, with increases in PPM failures attributed to both it and Network Rail.

ScotRail also had a poor quarter, with its PPM figure of 88.5% the lowest since 2004-05. West Midland Trains recorded a CaSL figure of 5.1%, although the ORR says this was mainly due to an increase of 306% in CaSL failures attributed to other operators.

CrossCountry also reported poor Q4 reliability, with a CaSL level of 6.6%, blamed on a 109% increase in failures caused by poor weather.

Great Western Railway also suffered from poor weather, with its Q4 PPM of 83.9% representing a fall of 6.4pp from the year before. PPM failures attributed to GWR included a 109% increase in fleet delays and a 348% rise in train crew causes.