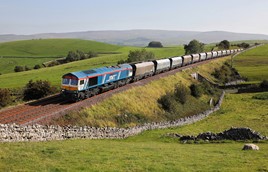 The amount of freight carried by rail was at its lowest for 22 years during lockdown, figures published by the Office of Rail and Road on September 24 reveal.

However, performance improved due to the reduction in passenger trains running, with 97% of freight trains arriving within 15 minutes of the scheduled arrival time.

In terms of commodities moved, coal suffered the biggest drop in Q1 2020-21 (down 42.9 percentage points), although that remains consistent with longer-term trends. Meanwhile, international traffic dropped 39.9pp compared with the corresponding quarter last year, to its lowest quarterly level since 2007-08.