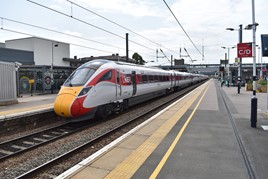 Azumas will run to the Highlands from November 25, when nine-car Class 800/1 bi-modes enter traffic between London King’s Cross and Aberdeen.

Two weeks later, on December 9, the Hitachi ‘800s’ will start serving Inverness on trains to and from London. Both routes are currently operated by High Speed Trains.

The announcement was made on September 23, the day Azumas replaced Class 91s on LNER trains between London King’s Cross and Glasgow Central.