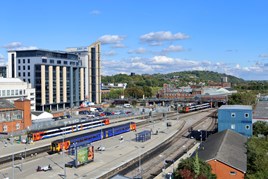 Rail companies must work harder to discover what the public wants from them, according to Chris Gibb.

The former Virgin Trains boss and current Network Rail non-executive director was speaking independently at a conference about capacity and performance run by the Institution of Mechanical Engineers in London on November 14.

He said he doubted any passengers paid attention to posters displayed at stations detailing operator performance. “They’re only interested in their train,” he said.

While many managers were very good at talking to passengers, Gibb said that the railway must place more emphasis on the latter’s views, and asked who was talking to London-Scotland airline passengers about what they wanted from rail.

Gibb went on to say that rail companies should also pay more attention to staff, and engage with them. “Don’t just brief them, engage with them,” was his message. He explained that if staff understood why timetables had changed, for example, they would be able to explain those changes to passengers.

Former Iarnrod Eireann Chairman Dick Fearn echoed Gibb’s view. Now chairman of the Western Route Supervisory Board, Fearn argued for decisions to be taken at lower levels, noting that many winners of RAIL’s National Rail Awards Train Operator of the Year were smaller companies such as c2c, rather than larger ones.