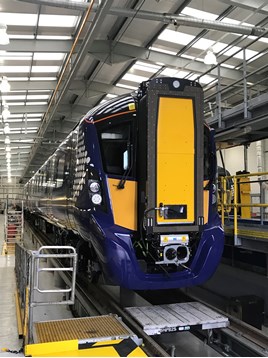 The first Hitachi Rail Europe Class 385 for ScotRail was unveiled at Glasgow Shields Road on December 11, a week before it begins testing on the Scottish rail network.

Four-car 385102 is the first of 70 electric multiple units built by the Japanese company for SR. In total 46 three-car and 24 four-car trains will be delivered.

Initially the EMUs will be used on Edinburgh to Glasgow via Falkirk trains from September next year, before being introduced on routes across the country.

Speaking at the launch, Scottish Transport Minister Humza Yousaf said: “We are on the cusp of a rail revolution, and the Class 385 is an important part of that. Importantly they will shorten journey times and provide improved capacity. I want to thank the teams involved, as I believe from signing the deal to the start of testing took ten months.”