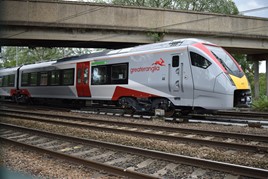 The first of 38 Stadler bi-mode trains will be introduced onto the Norwich-Great Yarmouth route from the end of June or early July.

Speaking at the launch of the Norwich in 90 services on May 20, Greater Anglia Managing Director Jamie Burles told RAIL that the main reason for this was to remove the Class 37-hauled Mk 2 set currently hired from Direct Rail Services. It was due to have been removed from weekday traffic on May 17, but the contract has been extended until at least June 24.

“On the bi-mode front, we have sent the technical files to the Office of Rail and Road for certification. That’s to enable us to put them into traffic.” Burles told RAIL.

“The train is compliant now, but we want to improve them still further.”
Diagrams on Greater Anglia are now planned for Class 755 operation rather than the existing GA fleet, which will allow the operator to ease the trains into traffic.

Burles said of the Class 755s: “These will be the most reliable regional train in the UK by a country mile - they had better be. They will be InterCity quality for rural routes, and will exceed expectations.”