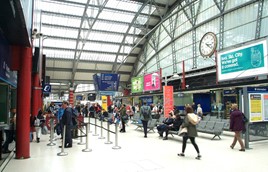 The decline in the number of passenger journeys is a “relatively recent phenomenon”, according to Rail Minister Jo Johnson.

Responding to a question by Shadow Transport Secretary Andy McDonald during a House of Commons session on transport on July 5, Johnson said: “It is difficult to determine exactly why we have this decline in season tickets, but we believe that it is due to factors such as strikes and recent station closures. In areas outside of London where there have not been those factors, we have not seen similar declines in passenger journeys.”

The decline has been the biggest since privatisation, and McDonald called the reply “poor, very poor”.

He added: “The fact that the Minister is not more alarmed by this sorry state of affairs will be of great concern to millions of long-suffering passengers. It has never been clearer that there is something very seriously wrong with the railways on his watch, with franchising failure, timetabling chaos, broken promises on investment, and people shifting from rail to road.”

Johnson retorted that Labour’s plans for nationalisation would not help the current problems.

He told McDonald: “Labour’s policies of nationalisation would be no panacea for the challenges we face. Indeed, those challenges spring to a very large extent from the publicly owned parts of the rail industry - namely Network Rail, the part that is in state control.”