Jobs to go at Hitachi’s northeast base 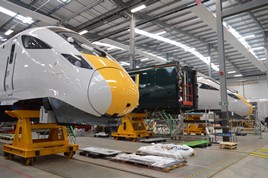 Around 150 contractors will cease working at Hitachi’s Newton Aycliffe factory in County Durham at the end of the year.

The manufacturer had taken them on to work on the Intercity Express Programme and ScotRail Class 385 orders.

A Hitachi spokesman said: “It was always in our plan to have a number of people on Fixed Term Contracts, to allow our business to flex according to demand. These Fixed Term Contracts were until December 31 2018. As we had two projects running concurrently, we needed this extra support.”

More than 700 staff will be retained at the site.

The news comes after the company lost the race to build the first part of Transport for London’s Deep Tube Upgrade (to Siemens). In a Joint Venture with Bombardier, Hitachi hopes to secure the deal for a minimum of 94 trains rising to 109 (and potentially 250). The Joint Venture (JV) is now legally challenging the decision.