Intention remains for Azumas to Middlesbrough 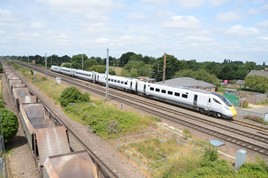 Direct London King’s Cross-Middlesbrough services operated by LNER Azumas will be delivered when there is sufficient capacity.

Rail Minister Jo Johnson made the announcement in a Commons Written Reply to Anna Turley (Labour Co-operative, Redcar) on September 5. However, he did not give a date for the introduction of the services, which were a commitment of the previous Virgin Trains East Coast franchise.

Johnson told Turley that Government is working with Network Rail to deliver infrastructure enhancements on the East Coast Main Line, that are planned to be delivered in the early 2020s.

He said LNER is to put into service “a new fleet of trains through the Intercity Express Programme planned to be fully introduced in 2020. It remains our intention to deliver additional services to Middlesbrough when capacity is available to do so.”