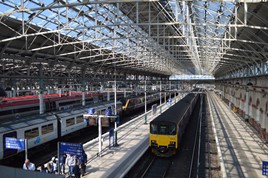 Northern Powerhouse Rail and HS2 would create a rail revolution for the North, according to Transport for the North Chief Executive Barry White.

In an open letter published on November 4, he said of NPR and HS2: “Delivered together, in lock-step, they would amount to a rail revolution for the One North economy we set out to achieve in 2015 - one our communities have waited for patiently.”

White claimed that the need for investment is clear: “It’s evidenced in the daily slog of today’s rail passengers. Timetabling conundrums, packed trains, passengers left on platforms - a congested network buckling under the strain of its own success. One struggling to cope today, let alone equipped to serve the predicted four-fold increase in passengers between now and 2050.”

Passengers travel from Manchester-Sheffield at half the speed of those between Milton Keynes and London, he said.

White reiterated plans for the £39 billion NPR network that he claimed would run from Liverpool-Hull and Sheffield-Newcastle, describing it as “a mix of new lines and significant upgrades bringing fast, reliable journeys to our main hubs. Millions of people better connected by rail.”

Renewed calls for better east-west links in the North