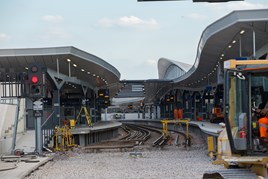 Up to and including September 2, Southeastern trains that would usually run into London Bridge, Charing Cross and Waterloo East have been diverted to Cannon Street, Blackfriars, Victoria and Waterloo to a wholly revised timetable.

NR said great progress has already been made with new track and signalling equipment installed, which it said allowed the lines to reopen in the early hours of Monday morning as planned.