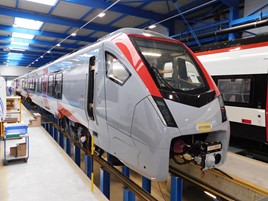 The first four-car Class 755/4 bi-mode unit for Greater Anglia was unveiled to the press in Erlen, Switzerland on May 3.

GA has 24 four-car and 14 three-car BMUs on order from the Swiss manufacturer. They will enter traffic from next summer, when GA expects to have around 20 Class 755s in the UK.

There are a further 20 12-car Class 745 electric multiple units also being constructed.

The first Class 755 is due to be delivered to Norwich Crown Point in October, with a Stansted Express Class 745 due at the depot by the end of the year.

All BMUs are fitted with 16 litre V8 engines supplied by Deutz. Each is capable of 650hp. A four-car BMU will have four engines, while a three-car will have two. These are located in a power car. The trains feature articulated bogies.

Stadler told RAIL that dynamic testing of the trains starts in July, with 16 trains needed. Eight teams will be involved in testing at seven locations across Europe including in the Czech Republic, Germany, Poland, Romania and Switzerland.

The order is worth £600 million as part of a £1.4 billion order for 1,043 vehicles. Stadler is supplying 378 vehicles for GA leased from Rock Rail, with Bombardier providing 665 Aventra vehicles leased from Angel Trains.