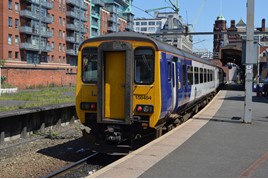 This is an extension of the scheme that was available previously for delays of 30 minutes or more. Passengers can now claim compensation worth 25% of the single fare if delayed between 15 and 29 minutes.

Rail Minister Andrew Jones launched the scheme, saying: “Extending ‘Delay Repay’ to cover 15 minute delays is the right thing to do for Northern passengers. Our absolute priority is delivering the reliable services passengers deserve, but when things go wrong people must be compensated fairly and quickly.”

Northern Deputy Managing Director Richard Allan said: “We are truly sorry for the inconvenience caused by the disruption to rail services earlier this year and have paid special compensation to more than 11,000 season ticket and non-season holders since the summer.

"Now, with the launch of Delay Relay 15, those customers who experience day-to-day delays will be able to claim the compensation they want and deserve. Our team works hard to deliver a consistent, punctual service but delays do happen and extending the scheme is the right thing to do for our customers.”

Strategic Rail Director at Transport for the North David Hoggarth said: “The major disruption passengers across the North have endured this year has been unacceptable, it’s only right that they’re compensated when things go wrong.

Department for Transport said that more than 12,000 claims from Northern passengers have already been submitted following the announcement of a special compensation package earlier this year. More than £1million has been paid so far.