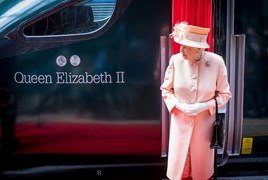 Her Majesty the Queen travelled aboard a Great Western Railway Intercity Express Programme Class 800 on June 13, to commemorate the 175th anniversary of the first rail journey made by a monarch.

Travelling with husband Prince Philip, HM The Queen travelled from Slough to London Paddington aboard 800003, before then naming the IEP Queen Elizabeth II.

Back on June 13 1842, a train carrying Queen Victoria was driven by Sir Daniel Gooch and assisted by Isambard Kingdom Brunel. GWR re-created the event, for which it was joined by Gillian White and Isambard Thomas, who are direct descendants of Gooch and Brunel. On June 13 2017, the IEP Class 800, built by Hitachi, was operated by GB Railfreight.

“We are delighted that The Queen and the Duke of Edinburgh were able to join us to mark this historic anniversary. We at GWR are extremely proud of our heritage, and this occasion marks a very special moment in the history of the Great Western Railway,” said GWR Managing Director Mark Hopwood.

Network Rail’s Western Route Managing Director Mark Langman said: “It is an honour to have welcomed The Queen and the Duke of Edinburgh to Paddington station 175 years after the first royal arrival into the iconic London station by train.

“Today marked the culmination of years of hard work by Network Rail teams and our colleagues at GWR. It demonstrates the closer working between the rail industry partners to deliver a better railway for passengers - continuing the proud story and tradition of the Great Western Railway.”

Secretary of State for Transport Chris Grayling was also at Paddington. He said: “This is a truly inspirational event and a fitting tribute to the proud heritage of Brunel’s railway. This route remains one of the foundations of our rail network and as a nation we should be proud of our railways, which continue to be the bedrock of our public transport system.”

Karen Boswell OBE, Managing Director of Hitachi Rail Europe, said: “We trust that Her Majesty enjoys the space, comfort and smooth ride on our new Intercity train. From the autumn, passengers will begin to feel the benefits of this new British-built fleet as they travel around the Great Western route.”