Hydrogen trains could run on the Far North Line 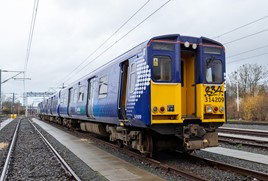 Veteran three-car 314209 arrived at the Bo’ness & Kinneil Railway (BKR) by road on December 18 for conversion and tests. It’s hoped it can be demonstrated at the United Nations Climate Change Conference (COP26) being held in Glasgow on November 1-12.

The ‘314’ is part of a Scottish Enterprise project, in partnership with Transport Scotland and the University of St Andrews’ Hydrogen Accelerator.

“This is a long-term project with the aim to produce hydrogen fuel cell trains on long-distance routes in Scotland to places like Thurso and the west coast. The key thing is you cannot electrify these lines,” said Professor John Irvine, from the University of St Andrews.

“This project has the potential to be a game changer for the future of Scotland’s rail rolling stock,” said Scottish Transport Minister Michael Matheson.