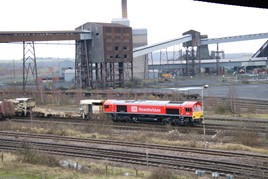 A previous trial using a Class 67 on the Toton load bank had taken place in December (RAIL 921). The ‘67’ had been chosen because it has the same engine as fitted to the core ‘66’ fleet.

The second trial, featuring 66150, was the first to be carried out on the main line. A load bank trial using a ‘60’ is due to take place, followed by a main line trial.

Speaking exclusively to RAIL on January 15, DB Cargo UK Head of Asset Management and Maintenance Steve Wilkinson explained it’s estimated that using HVO instead of red diesel reduces a train’s carbon emissions by up to 90%.

No modifications are needed to enable a locomotive to be powered by HVO, and the two fuels can be mixed.

DBC Senior Mechanical Engineer Paul Wilton highlighted that a key benefit for HVO is that it’s available now and doesn’t need to pass through approval processes, compared with other alternative powers.

DB Cargo (DBC) has put a further 12 Class 60s up for sale, with a deadline of registrations to receive tender documents on January 20.

DB set to put international freight arm up for sale

Deutsche Bahn (DB) is to prepare a case for a potential sale of up to 100% of its shares in its rail, road and international freight arm DB Schenker (DBS).