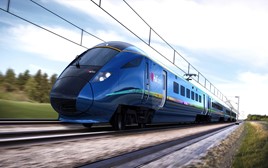 The company has ordered the 125mph trains from Hitachi Rail Europe. Delivered from the same batch as 19 destined for TransPennine Express, the HT sets are due to enter traffic in December next year, replacing the four Class 180s it currently uses.

The ‘802s’ will offer additional capacity, and HT Project Director for New Trains Phil Cameron said: “We’ve reached the end of the engineering and design phase, and have now completed final sign-off for production. Decisions have now been made on the new interiors, which will be brighter and much more spacious and streamlined.”

The next stage is to start training plans, ahead of the launch of the fleet.

The 24 Class 802s ordered for HT and TPE were due to be assembled mainly in Newton Aycliffe. However, delays to the ScotRail Class 385s at the County Durham site means that seven will now be built in Kasado (Japan) with the remaining 17 trains built at Hitachi’s Pistoia plant in Italy (RAIL 852).