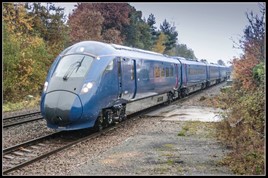 New Hitachi Class 802/3 bi-modes are due to enter traffic between London King’s Cross and Hull from early December.

The first of five five-car ‘802s’ destined for open access operator Hull Trains was delivered to Eastleigh on November 7. The five sets, branded Paragons, will receive HT’s new livery at the Hampshire depot before undergoing mileage accumulation on the East Coast Main Line.

Hull Trains Managing Director Louise Cheeseman explained: “On arrival in the UK, they are required to pass fault-free running on the tracks as part of final safety checks, before undergoing the final stages of training and familiarisation with our staff.

“We expect the new Paragon fleet to commence operating in passenger service early in December 2019.”