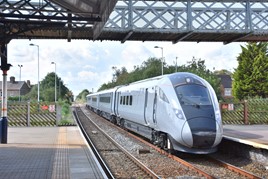 Hull Trains has begun training its drivers on Class 802s, ahead of introducing its own fleet later this year.

Using a TransPennine Express ‘802/2’, the open access operator is running between Hull and Peterborough with an initial 18 drivers learning the new trains. Training is expected to finish in late November, by which point HT will have introduced the first of its new trains into traffic.

Each driver has completed 30 hours in the classroom, six hours on a simulator, and three days on a static train. The next part of the training involves 20 hours on the TPE set.

The first HT Class 802/3 bi-modes are due in the UK in early September, with initial tests carried out by Hitachi before training begins. All five on order will be in traffic by the end of the year, allowing HT to withdraw its four Class 180s and two High Speed Trains.