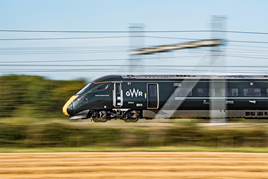 More than 10,000 extra seats will be available to Great Western Railway passengers on January 2, compared with the same number last year.

This follows the delivery of the final Class 800 Intercity Express Train.

GWR Managing Director Mark Hopwood said: “The new Intercity Express Trains have already helped us increase seats on the journeys they operate by almost a quarter, and in the past three months are proving 20% more reliable than the older trains they are replacing. And they’ve helped deliver some of the best on-train satisfaction scores for some time – including improvements in seat comfort and on-board information.

“From the New Year, thanks to the progression of Network Rail’s electrification programme, we will also be able to run electric trains to Newbury for the first time.”

An IET has 24% more seating per train than the High Speed Trains they are replacing.

Hitachi Rail Europe MD Karen Boswell said: “Thanks to the hard work of our teams across the country we’ve now delivered all the Intercity Express Trains for GWR’s mainline route, benefitting millions of journeys. From our train factory in the North East through to our dedicated maintenance teams in London, Bristol and Swansea, we are proud to be part of the Great Western family.”

Network Rail Western Route MD Mark Langman said: “Passengers from London to the west and south west are now seeing the huge benefits of the biggest modernisation of the railway since it was built following years of upgrades and unprecedented investment.

“We have worked closely with GWR as the railway has been transformed in all regions that we cover.

“In 2019 the transformation will continue including in January where electric services will start at Bristol Parkway and Newbury for the first time.”