HSTs bought for charter use 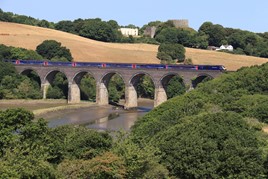 Redundant High Speed Trains have been bought by Locomotive Services Ltd, and will enter traffic next year.

The company has also purchased two Class 90s, as it seeks to expand its existing operations. The purchase of only one HST has been confirmed, although RAIL understands that a deal is in place for more. It is buying the HSTs and Class 90s from Porterbrook, which declined to comment when asked by RAIL about the deal.

LSL owner Jeremy Hosking said: “Locomotive Services Limited are pleased to announce that we have recently entered into an agreement that will see our operational fleet expand from 2019.

“The inclusion of a High Speed Train , Mk 3 coaching stock and Class 90 locomotives in our fleet will enable the continued expansion of our operation, while protecting our heritage assets from excessive use. We will be providing further details in due course.”

It is currently unclear how the HSTs will be used, but RAIL sources have suggested the company is targeting the luxury market with First Class and catering to be offered.

The HSTs will be those sent off-lease by Great Western Railway. Currently no Porterbrook-owned HSTs have been returned by GWR, although this will happen later in the year as more Intercity Express Trains are introduced.