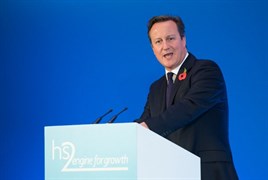 A high-speed railway line between Leeds and Manchester - dubbed HS3 - has been fully endorsed by Prime Minister David Cameron.

Higgins suggested that HS3 would be as important to the north of England as Crossrail is to London, although would only be one step in improving transport as a whole between Liverpool and Hull.

“Reducing the journey times between and within our cities isn’t just desirable for both passengers and freight, it is a strategic necessity,” said Higgins.