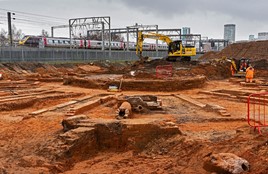 Archaeologists working on HS2 in Birmingham have uncovered the remains of what is believed to be the world’s oldest railway roundhouse at Curzon Street station.

The London & Birmingham Railway facility was built to a Robert Stephenson design and opened in November 1837. Surviving remains include the base of the central turntable, exterior wall and inspection pits. The roundhouse predates the one in Derby by almost two years.