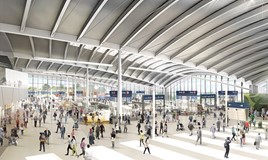 Progress on High Speed 2 Phase 1 is now at “full throttle”, according to HS2 Ltd’s Director of Infrastructure Chris Rayner.

Speaking exclusively to RAIL, Rayner said the main works on HS2, which he described as the biggest railway project since the Victorian era, are set to start in around one year’s time. The peak in construction on the project would be around 2024-25.

He explained that preparatory works have been ongoing for around two years. This has included the demolition of Old Oak Common depot, while Platforms 17 and 18 at London Euston have been taken out of traffic and the terminal’s western wall has been partially removed. The next stage will be where the “trace” of the railway starts to appear.

“I remember working on the Channel Tunnel Rail Link. I travel the sites now on HS2 and it looks the same,” he said.

Longer-term, Rayner does not believe that COVID-19 will have a detrimental impact on the need for the new railway: “This is seen as a 120-year investment. We have been asked to build this railway, and I cannot see business continuing like this ."

“Look at London - all the trains were full and more transport is good for the economy. It will continue to grow.”