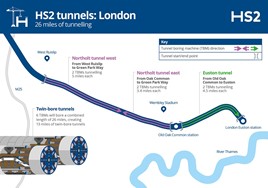 The tunnels will be 13 miles long each way and stretch from central London to the M25. Two Tunnel Boring Machines (TBMs), specifically designed to cope with the London clay and chalk ground conditions they will pass through, are currently being built by Herrenknecht in Germany.

Overall, ten TBMs will be used on HS2 Phase 1 to construct 64 miles of tunnels between London and the West Midlands.

The London tunnels will begin just outside Euston and emerge at Old Oak Common. From there, the route dives back underground until reaching the outskirts of West London.

“HS2’s London tunnels will help ensure many homes and habitats in the capital remain undisturbed. This is a key part of our commitment to deliver Britain’s new high-speed railway in the most environmentally friendly way and minimising disruption to our neighbours,” said HS2 Ltd Client Director Malcolm Codling.