HS2 granted Royal Assent with construction to begin this spring 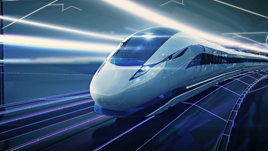 Permission for the railway was granted following three years of Parliamentary scrutiny. The Department for Transport said construction will begin this spring.

“Getting the go-ahead to start building HS2 is a massive boost to the UK’s future economic prosperity and a further clear signal that Britain is open for business,” said Secretary of State for Transport Chris Grayling.

“HS2 will be the world’s most advanced passenger railway and the backbone of our rail network. Royal Assent is a major step towards significantly increasing capacity on our congested railways for both passengers and freight; improving connections between the biggest cities and regions; generating jobs, skills and economic growth; and helping build an economy that works for all.

“By investing in infrastructure the Government is seizing the opportunity provided by leaving the EU to build a more global Britain. We will now press ahead with constructing the railway while continuing to ensure affected communities get appropriate support and are treated with fairness, compassion and respect.”

The new railway will create around 25,000 new jobs during construction and 2,000 apprenticeships. DfT said it will “also support growth in the wider economy, worth an additional 100,000 jobs”.

The railway will open in 2026 to Birmingham, and from 2033 it will serve Manchester and Leeds.

HS2 Ltd Chairman Sir David Higgins said: “Achieving Royal Assent for Phase 1 of HS2 between Birmingham and London, with such significant Parliamentary support, is a monumental step in transforming rail travel in Britain.

“We have a long journey ahead of us to build the railway and secure permission for Phase 2, to make sure that the full benefits of HS2 are realised.

“This journey will see businesses right along the route benefit from greater access to the skills, markets and professional services they need to succeed in today’s global market. It will directly create some 25,000 jobs as well as forcing the pace of innovation in the construction industry.

“Throughout this process HS2 remains committed to mitigating the environmental impacts, while continuing to engage with each individual community which is making sacrifices to enable a 21st century railway network to be built in Britain.”

The High Speed Rail (London-West Midlands) Hybrid Bill - essentially the planning application for HS2 - received overwhelming support from MPs. In the Bill’s third reading in the Commons MPs voted 399 to 42 in favour. In the Lords, the figures were 386 to 26 in support of the Bill being passed.