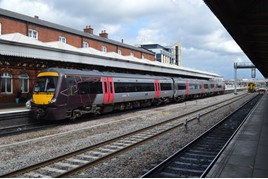 Hourly services from the Curzon Street HS2 station, running to Nottingham, Leicester and Leeds via the East Midlands Hub at Toton could more than halve journey times as well as boosting the economy by at least £1.4 billion.

Midlands Connect has submitted the business case to the Department for Transport, which if approved could see Nottingham-Birmingham journey times cut to 33 minutes from an average of 72 at the moment, while Leicester-Leeds could take 46 minutes rather than the current two hours. Only 19% of Birmingham-Nottingham journeys are made by rail, compared with 51% between Manchester/Sheffield and Birmingham.

Under the latest plans, passengers would use the existing network to reach Toton before boarding an HS2 service. Midlands Connect says its plans would use new classic-compatible electric trains.

“Now we have more clarity over the costs and timescales of HS2, is it time that the true benefits of high-speed rail are also fully understood to make sure the project goes ahead in its entirety, said Sir John Peace, Chairman of Midlands Connect and Midlands Engine.