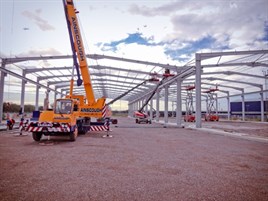 The first pair of TBMs is due to be delivered to the Royal Oak portal in early 2012, ready to tunnel their way to Farringdon in the spring.

Construction work on a concrete tunnel segment production facility at Old Oak Common has also now begun. Built on railway land, the factory will employ about 50 people. Once operational, it will contain 216 moulds that will be used to produce the 75,000 concrete sections required to line Crossrail’s western running tunnels, at a rate of about 200 segments each day. The purpose-built factory will be complete by the end of the year, and will be removed once segment production ceases later in the project.

Work to build a jetty at Wallasea Island in Essex began on August 15, to enable barges to offload an estimated 4.5 million square metres of excavated tunnel material, beginning next year. The material will be used for landscaping a 1,500-acre RSPB nature reserve, set to become one of the largest wetland reserves in Europe. The first barges will begin depositing soil at Wallasea during the summer of 2012.

Crossrail is also currently building a replacement pump chamber for London Underground, to accommodate Crossrail works and to prevent flooding at Westbourne Park station. The new pump chamber incorporates two shafts, the largest of which is 12 metres deep and five metres wide, and connected to a smaller shaft by a 40m tunnel.

This tunnel is being bored by a pipe jack, or mini-TBM, which forces specially designed pipes through the ground and excavates soil using a grab technique. The resulting tunnel walls are then lined with a grout mixture to prevent resettlement. Once the tunnel is dug, a series of pumps will be installed to remove excess water.

The opening of Crossrail’s Tunnelling and Underground Construction Academy (TUCA) at Aldersbrook Sidings near Ilford is also now imminent. The building’s reception and refectory areas are in the final fitting-out stages, and the academy will be welcoming its first students this October.

Some 300 students have already been put through their Tunnel Safety Card training at Crossrail’s Canary Wharf offices - essential training that is a pre-requisite for anyone working below ground. The academy, the first of its kind in the UK, will train at least 3,500 people in tunnelling and Underground construction over the life of the project, leaving in place a skills legacy to benefit other future tunnelling projects such as the Thames Tideway Tunnel and High Speed 2.

Meanwhile, Crossrail contractor J Murphy & Sons has donated 300 metres of track and 220 sleepers to an overground railway apprenticeship academy in Newham. The materials were reclaimed from a disused section of the North London Line between Canning Town and North Woolwich, which closed in 2006. Crossrail’s Abbey Wood branch will be reusing a section south of Canning Town, with the stretch including the refurbished Connaught Tunnel.