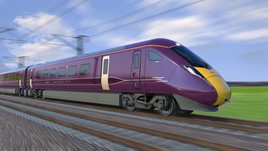 Thirty-three five-car bi-mode trains will be built by Hitachi for East Midlands Railway.

The £400 million deal will be funded by Rock Rail, with the trains in traffic in 2022. They will replace the current High Speed Trains and Class 222s on the Midland Main Line.

Although built as five-car trains, they will regularly run in ten-car formations.

Dominic Booth, Abellio (UK) Managing Director said: “These new trains form the centrepiece of our ambitious plans for a complete replacement of all the trains on the East Midlands Railway and are a more than £600 million investment to really improve the region’s railway. They will respond to what our passengers have told us they want with more frequent services, faster journeys between the East Midlands and London, and provide more capacity with 80% more seats into London in the morning peak”.

Karen Boswell, Hitachi Rail UK MD said: “Today’s announcement will be welcomed in workshops and engineering centres across the country, thanks to our large network of UK suppliers. Our train factory in County Durham sources train parts from across the country, including a significant amount from the region where the new trains will run.”