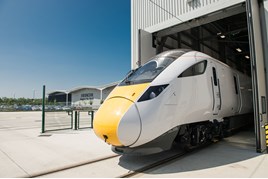 Known as T5, the bi-mode train has been assembled at HRE’s Newton Aycliffe facility in County Durham, and is the first of 110 IEPs to come off the production line. A further 12 have been built in Japan.

It was inspected by Secretary of State for Transport Chris Grayling, Minister for Northern Powerhouse Andrew Percy, and Ambassador of Japan in the UK Koji Tsuruoka.

HRE opened the £82 million facility in September 2015, and by next spring it will employ around 900 staff.

“Today is a celebration of the return of train manufacturing to the North East, supporting thousands of jobs and developing a strong engineering skills base in the region,” said Hitachi Rail Europe Managing Director Karen Boswell.

Virgin Trains East Coast Managing Director David Horne said: “This factory will also start producing our new Azuma trains in 2017, and we’re looking forward to them entering service and transforming the experience on the East Coast.”

Great Western Railway Managing Director Mark Hopwood said: “We are delighted to be here to witness the unveiling of this first UK-built train, which passengers can expect to see operating on our network next summer, and in regular timetabled service in the autumn.

“The new trains will provide a step-change in passenger experience across the Great Western network, and will result in more frequent and faster journeys, and an increase in the number of seats available.

Kentaro Masai, Vice President and Executive Officer, Chief Operating Officer, Railway Systems Business Unit, Hitachi Ltd, said: “It is my greatest pleasure to be here today to celebrate the completion of the first Hitachi IEP train manufactured in the UK. It was 90 years ago in 1926 that a senior Hitachi engineer first visited the north of England to study the leading-edge railway technology of the time.

“Today, we have a modern inter-city train built in the North East by combining the best of Japanese technology delivered with the best of British manufacturing.”