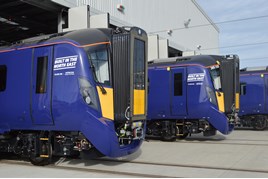 The electric multiple unit (EMU) is destined for ScotRail and is the first to be finished at the County Durham facility. It was unveiled alongside fellow three-car 385015 and four-car sets 385103/104. The other three are not quite as advanced as 385004. Three-car 385003 is also close to completion.

HRE is building 70 Class 385s for ScotRail - ten in Kasado (Japan), with 60 assembled at Newton Aycliffe. They were due to enter traffic in December on the Edinburgh-Glasgow route via Falkirk, but that has been delayed owing to issues surrounding the overhead line electrification, which has been energised but not tested. As this issue of RAIL went to press, it was expected that testing could begin in mid-October.