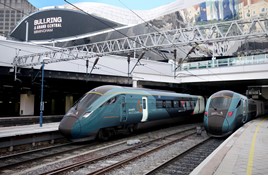 Hitachi will build 23 new trains for Avanti West Coast in a £350 million deal.

Ten seven-car electric multiple units and 13 five-car bi-modes will be introduced from 2022. They will be built at Hitachi’s Newton Aycliffe facility.

Regarding capacity, in a statement, FirstGroup said: “There are 453 seats on a seven-car train and 301 seats on a five-car train, increasing compacity compared to the Class 221 Voyager trains they replace (which have 258 seats).

“The seven-carriage version of the electric trains will have similar numbers of seats to a nine-carriage Pendolino, owing to the longer 26 metre carriages of the Hitachi trains.”

The trains are funded by Rock Rail West Coast. They will be based at Oxley, with a maintenance agreement signed with Alstom to carry out work alongside Hitachi on the trains.

Avanti West Coast replaces Virgin Trains this weekend as the operator of the West Coast franchise.